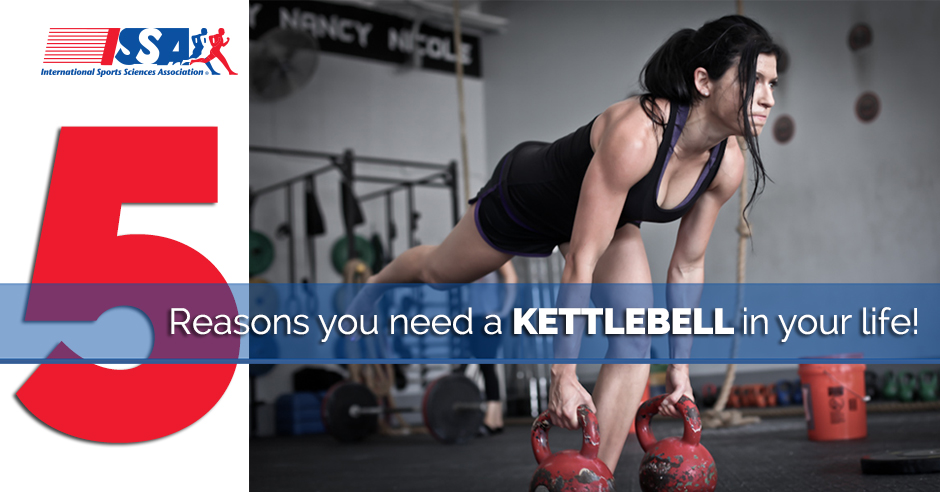 Pick up a Kettlebell, Change Your Life

I remember the day when I first laid eyes on a kettlebell—that heavy hunk of iron in the shape of a ball with a handle on it.

Little did I realize that this one piece of equipment would open the door to a whole new world and change my life forever.

I felt like I had jumped down a rabbit hole and found the holy grail of fitness. My journey learning the philosophy behind kettlebell training was fascinating and rewarding. It was a gateway to turning my body and my clients' bodies into machines.

The kettlebell philosophy is a paradigm shift that has rocked our world. 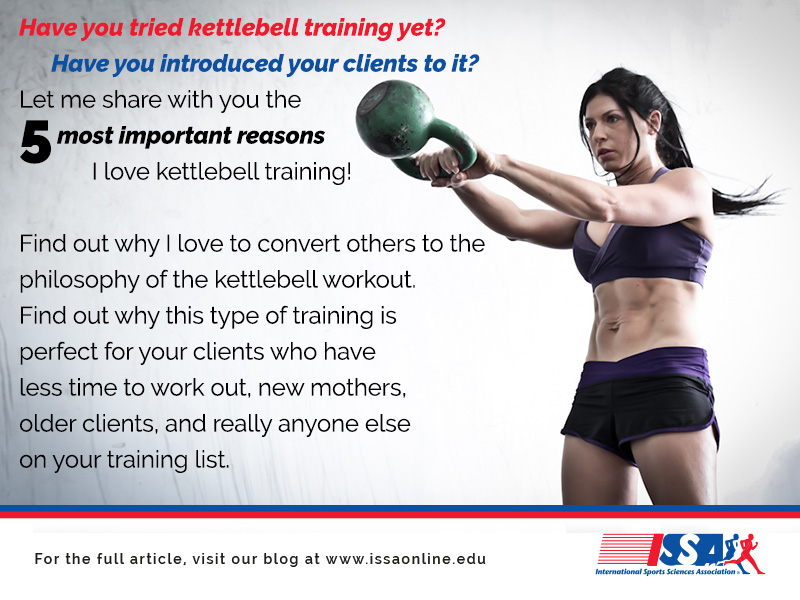 Unless you've been living under a rock, or you're just not fitness-obsessed, you've probably heard of a kettlebell by now, even if you're not exactly sure what it is. By itself, a kettlebell is a simple piece of athletic equipment: a cast iron ball with a handle.

But, the word kettlebell really doesn't do this philosophy of training much justice. It's not just a kettlebell or a piece of equipment.

When used properly in your regimen, a kettlebell and the philosophy of training that goes with it will greatly transform your life by increasing your strength, power, flexibility, and conditioning while whittling away fat.

I've trained thousands of people over the last 12 years using the kettlebell methods, and the results have been outstanding.

5 Ways a Simple Kettlebell Can Change Your Life 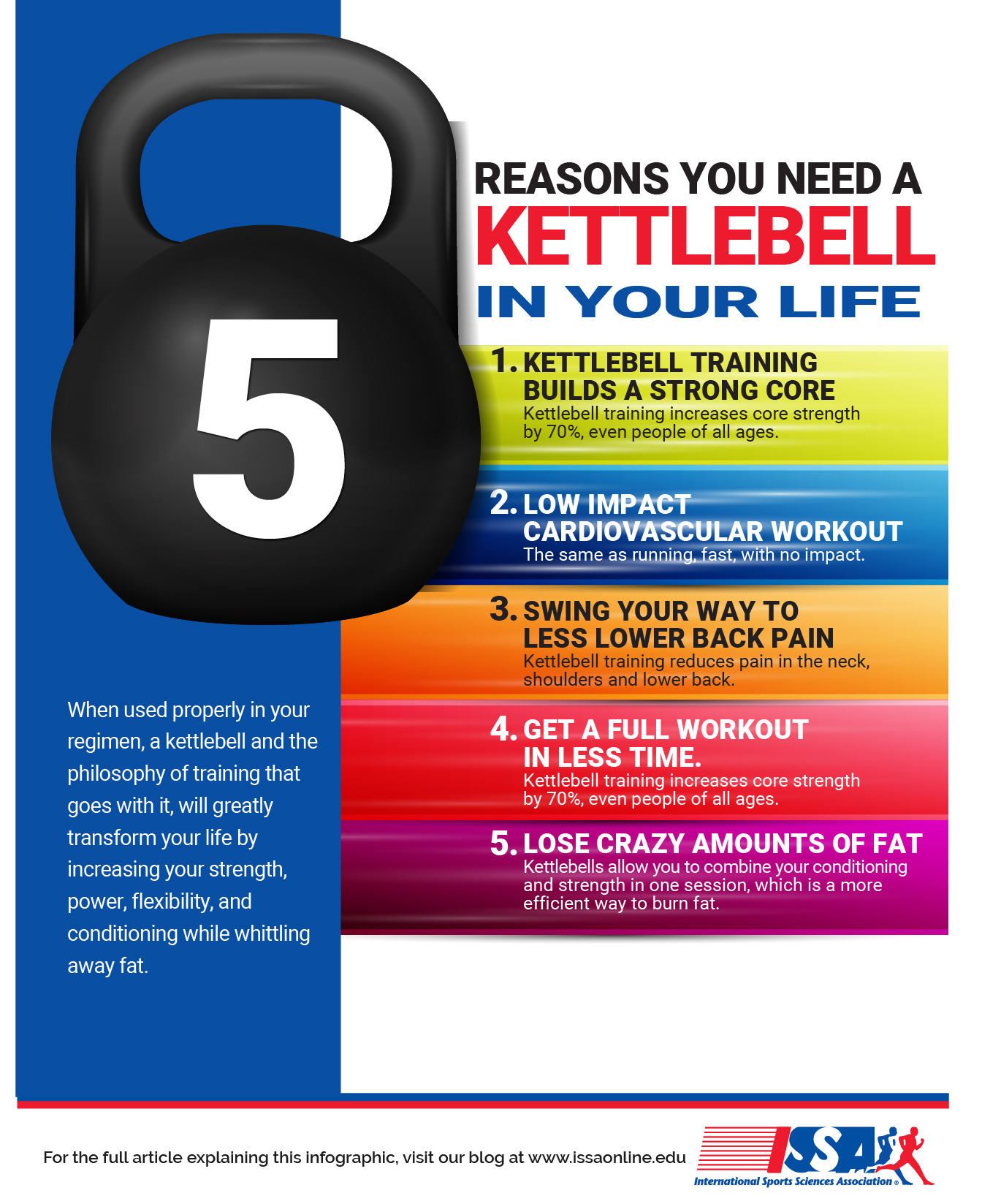 I love to share kettlebell training with the uninitiated because I believe so completely in its power to transform anyone. Even post pregnancy, women have worked with the kettlebell to become lean, mean, fat-burning machines. I know this first hand from my personal experience and from working with many women who've had 5, 6, 7 and even 9 kids. So, what can it do for you?

The majority of lifts used in kettlebell training require strong core engagement. When learning the proper movement patterns, your core will naturally engage in most of the exercises, which means you get a stronger core with every workout.

I found this aspect of kettlebell training particularly helpful as a core rehab tool after pregnancies and C-sections.

It's a good core workout for anyone, though. Researchers at the University of Wisconsin found that kettlebell training increases core strength by 70%, even people of all ages.[3]

2. A real cardiovascular workout that is low impact

Kettlebell workouts have proven to be able to provide the same cardiovascular benefits as you'd gain by running a 6-minute mile but without the impact.

That's right—the same as running, fast, with no impact . So you don't have to kill your joints. The ballistic, non-impactful movement of a kettlebell swing or snatch has been shown to increase VO2 max and improve aerobic capacity.

A study done at Idaho State University, and published in the Journal of Strength and Conditioning, found that collegiate athletes who used kettlebell training for four weeks gained an average six percent more in VO2 max than the control group did.

The kettlebell group that gained more VO2 max performed 20 minutes of kettlebell snatches with a 15 second on and off work-to-rest ratio, throughout the 20 minutes, while the control group did continuous high-intensity dynamic bodyweight and dumbbell exercises for 20 minutes.[1]

3. Swing your way to less lower back pain

The first thing I usually hear when I bring up the word kettlebell to someone who's never done it is:

But contrary to what people often think about kettlebell swings before they try them, these exercises have been shown to reduce pain in the back, shoulders, and neck.

When done properly, the kettlebell strengthens back muscles like no other workout routine. A study done in Denmark by the National Research Centre for the Working Environment found that kettlebell training reduces pain in the neck, shoulders and lower back.

They also found it improves muscle strength in the lower back among adults from occupations with a high prevalence of reported musculoskeletal pain symptoms.[2] I have seen it personally and have been able to help so many clients eliminate back pain with the use of kettlebell training.

For example, consider this testimonial from a student who suffered from back pain throughout her first pregnancy and was terrified of trying kettlebells—you can read the full story here.

"I told Lauren about my previous back issues and how I was very concerned that the kettlebell exercises looked so hard on your back. She promised me that once I learned the correct form, I would only be strengthening my back and core which will help me in the long run. I took a private class with Lauren a few months before becoming pregnant with my second child and began using her volume 1 kettlebell DVD*.*During my *second pregnancy, I did not suffer from lower back pain**. After my second baby was born (and yes, another c-section) I decided I would shed the weight by doing kettlebell classes."*

I kept telling Lauren I was fearful of using heavier weights*because I didn't want to "bulk up" and I was still very cautious in regards to my "weak back." After using kettlebells diligently 3-5 times a week for a year now, I can see that my body is much leaner, and I finally have defined muscles (which I have never had before) but absolutely no "bulkiness."*My back is so much stronger than it used to be, as is my core.

Kettlebell training strengthens more than just the back; it also strengthens the glutes, which is important for reducing back pain.

4. Get a full workout in less time

Busy moms, dads, and full-time workers don't always have time to spend one or two hours in a gym. Many give up because of the time pressure.

Kettlebell workouts are full-body workouts, so they provide total body strength and power in just one short session.

In the past 13 years, I've been able to show people how they can make changes to their bodies in just 12 to 15 minutes a day. This type of training has changed the lives of people who simply didn't have the time to do a longer workout, and who therefore thought training simply wasn't for them.

In addition to the efficiency benefit of each workout, the kettlebell allows you to work out almost anywhere. Whether from the privacy of your home or in your office, you don't need a whole lot of space.

Kettlebells allow you to combine your conditioning and strength in one session, which is a more efficient way to burn fat. And the kettlebell swing promotes a positive hormonal response that takes fat-burning even further.

In a study from the University of North Texas, men performed kettlebell swings for 12 sets of 30 seconds of work and then 30 seconds of rest with a 35-pound bell. Afterward, they saw significant increases in testosterone and growth hormone levels.[5]

Increasing testosterone and growth hormone levels has been shown to help with fat loss. It also increases muscle mass and energy.

Both men and women should have healthy levels of testosterone in their bodies. But as we age, our testosterone levels decline. Kettlebell exercise is a sure fire way to get testosterone levels up and running again which induced fat loss and increased muscle mass according to a study done by The Endocrine Society.[4]

As a cheerleader for kettlebell training, I could go on and on about this. I could list 100 ways that this training will change your life, but I'm hoping these five are enough to inspire you to give it a try. If they have, look out for my upcoming Kettlebells 101 article, and I'll show you how to get started the safe way.