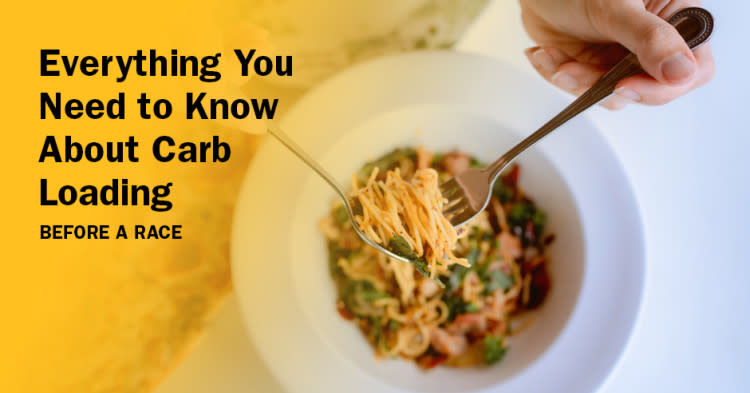 Everything You Need to Know About Carb Loading Before a Race

If you’re new to running or are training clients, you need to know about carb loading. It’s a fueling strategy that has helped many a runner avoid hitting the wall on race day.

In fact, carb loading isn’t just for runners. It can help all kinds of endurance athletes. If you have a big race or other long event coming up, learn how to fuel for it for the best results.

Carbohydrate, or carb, loading is a dietary practice endurance athletes use leading up to an event. It involves eating more carbs than usual in an attempt to avoid hitting the wall during the competition. If you have ever been on a long run, you know this feeling. Despite all the training you put in, you get to a point during the run at which you just can’t continue due to fatigue.

Proper race nutrition begins well before the carb loading period and extends beyond the race. Here’s a guide to marathon training nutrition to help you fuel for your next event.

Glycogen is the body’s easiest source of energy. It’s a string of glucose molecules that is stored in muscles and the liver. When you head out on race day, your body will first utilize glycogen for energy to fuel the run.

When your muscles run out of glycogen, you’ll start burning fat. Fat is an important energy source, but it’s more difficult to use than glycogen. You’ll feel that in the form of hitting the dreaded wall. It’s important to have your glycogen levels topped off before the event, which is what proper carb loading does.

The primary benefit of carb loading is avoiding the wall. It won’t make you faster, but by properly fueling for a race, you can run longer and at your best. In the end, this can be the difference between hitting or missing your PR or getting on the podium.

Another benefit of carb loading is that it could help you hydrate. If you load up on high-carb beverages (such as a sports drink), you’ll also be hydrating. Being poorly hydrated can be even worse for performance than running out of glycogen.

Carbs are important for many aspects of fitness, even building muscle. Learn more about why your strength training relies on carbs and how to fuel for bigger muscles.

It’s never necessary, but if you want to perform optimally on race day, you should carb load in advance. Think of it as topping up your fuel tank before setting out on a road trip. With a full tank, you won’t have to stop.

Although the practice is most often associated with running, you can benefit from carb loading before any endurance event. For running, carb load before a half marathon or marathon for the best results. Carb loading will also help with triathlons, distance bike races, and any other sport that requires significant endurance.

On average, people don’t run out of muscle glycogen until they’ve been going for about 90 minutes. It isn’t at all necessary to carb load before an event that takes less time. Don’t bother if you’re doing a 5K or 10K, for instance.

How to Carb Load Correctly

The image most people have of carb loading is a big bowl of spaghetti the night before a race. This isn’t actually how it works. One meal won’t adequately fill up your glycogen tanks. Here’s how to do it the right way:

In addition to carb loading before the race, you’ll benefit from snacking during the event. Try race gels or blocks and an electrolyte drink with carbohydrates. Re-fuel about 60 to 90 minutes into a race and then every 30 minutes to keep your body going.

Carb loading is a simple concept, but it’s also easy to do it wrong. Learn from the bad experiences of other runners and avoid these common pitfalls:

Carb loading is a tried and tested technique for fueling endurance events and workouts. If you want to perform at your personal best, take the time to eat properly and load up on carbohydrates. If you’re working with a client on a big race, talk to them about how to eat throughout training and in the days leading up to the event.

ISSA’s Nutrition Coach certification program is a great skill set to add to your personal training business. Nutrition and fitness go hand-in-hand, and being able to provide clients with diet and fueling advice will set you apart from other trainers.

By becoming an ISSA Nutritionist, you'll learn the foundations of how food fuels the body, plus step by step methods for implementing a healthy eating plan into clients' lifestyles.

DiChiara, T. Does Carb-Loading for a Marathon Really Work?. WebMD. Retrieved 3 May 2022, from https://www.webmd.com/fitness-exercise/features/does-carb-loading-for-a-marathon-really-work.