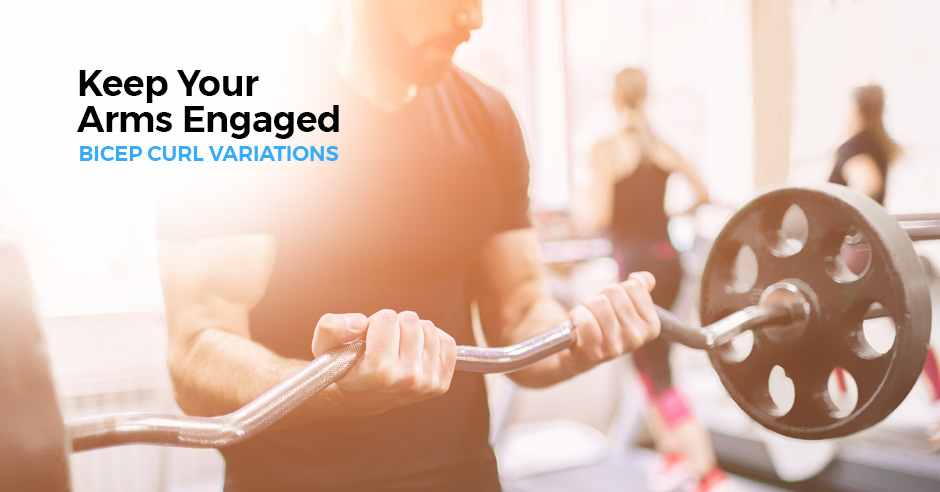 There are many ways to train the arms and the biceps in particular, but the biceps curl is a foundational movement for individuals of all fitness levels. Isolated biceps curls can be used in a workout for strength building and hypertrophy to build bigger arms. Training for strength often requires using tempo and time under tension while training for muscle growth will require heavier weight and different training splits.

The muscles recruited for a biceps curl include the anterior deltoid, the biceps brachii, the brachialis muscle, the brachioradialis, and the flexors and extensors of the forearm. Most of these muscles stabilize the shoulder, wrist, and elbow during a biceps curl and the muscles of the forearm control grip strength. The biceps muscle is the prime mover. The triceps are the antagonist muscle to the biceps brachii and are recruited to decelerate elbow extension during the eccentric biceps contraction.

Many biceps curl variations can be used to train the biceps muscle in a workout. Small changes to the grip, hand position, angle of elbow flexion, and range of motion used will change the synergist muscles engaged during the exercise.

Considered the standard biceps curl, the dumbbell curl can be completed seated or standing. With the arms fully extended at the sides and a supinated grip (underhand grip) on the dumbbells, curl the weight up towards the shoulder creating flexion only at the elbow. Extend the elbow and lower the weight back to the starting position.

With dumbbells, the movement can be alternated from one side to the other or done in tandem. A crossbody curl allows the dumbbell to start on one side of the body, but finish elbow flexion at the opposite shoulder. This engages the pectorals as well.

Holding two kettlebells with a supinated grip, curl the weight towards the shoulder until maximum elbow flexion is achieved. Extend the arm and release the weight back to the starting position.

The use of kettlebells is beneficial for two main reasons. First, the handle on a kettlebell is often thicker than dumbbells and can be easier to hold. Second, the weight is hanging, and tension is created through more of the range of motion than with a standard dumbbell. This applies specifically at full elbow flexion. With a dumbbell curl, there is little tension at the end of the concentric contraction when the weight is at the shoulders since it is in the hands. A kettlebell rests on the back of the hand and wrist at maximum elbow flexion which continues to stimulate the biceps.

This bicep curl variation is like the standard biceps curl with one small adjustment. Turn the palms towards the midline of the body with the thumbs up. Curl the weight up towards the shoulder creating flexion only at the elbow. Extend the elbow and lower the weight back to the starting position.

The rotation of the palms adds a focus on the brachialis and brachioradialis in a way that many other variations cannot.

For this curl variation, a barbell is used instead of dumbbells. With an underhand grip at shoulder width on the bar, curl the bar upwards towards the shoulder. Curl until maximum elbow flexion is reached with the elbows staying at the sides of the body. Extend the arms and lower the weight back to the starting position.

The barbell curl requires a greater degree of flexibility and range of motion at the wrist and elbow than the dumbbell curl since the hands are set on the bar and do not move.

The reverse curl adjusts the hand position yet again. Whether using dumbbells, kettlebells, or barbell, the grip is switched to overhand. The pronated grip targets the biceps and the brachioradialis in the forearm.

The cable curl uses a cable machine for the exercise instead of free weights. Within this option, there are many different hand positions to build strong biceps. When handles are used, a standard underhand grip, overhand grip, or hammer grip can be used. There are also straight bar and EZ bar cable attachments.

The angle of the curl can be adjusted. A high cable position will engage the anterior deltoids and upper pectorals as the upper arm will be held parallel to the floor with external rotation of the shoulder to engage the biceps brachii during elbow flexion. On the other hand, a low cable grip will require a slight pinch in the upper back to retract the shoulder blades and keep the chest open during elbow flexion.

For incline curls, start lying supine on an incline bench. The angle recommended is 45 to 60 degrees. Let the arms hang down with a weight in each hand. Brace the abdominals and flex the elbow to bring the weight towards the shoulders until maximum elbow flexion is achieved. Extend the arm and release the weight back to the starting position.

The angle of this variation works to isolate the biceps brachii. The hands can be supinated or rotated for a hammer curl. It is challenging and should be attempted with lighter weight to avoid injury until proper strength is built.

The Zottman curl is best done with dumbbells, kettlebells, or bands as it requires rotation through the wrist. Start like a standard curl, palms up. As the elbow flexes, bringing the weight toward the shoulder, the palms rotate away, engaging the muscles of the forearm. As the arm extends, rotate the wrists back to the supinated position.

For this variation, lighter weight is suggested to protect the muscles of the lower arm.

The preacher curl was made popular in bodybuilding and can be done with one arm or two (unilaterally or bilaterally) and with any type of load (dumbbells, kettlebells, cable, or barbell). This variation makes use of a preacher curl bench that supports the arm to isolate the biceps.

Machines are an option to isolate and use a set range of motion as opposed to the larger range of free weights. The set range of motion allows for isolation of the biceps muscle. Curl machines range from a preacher set up to a seated set up with the arms starting down at the sides.

A concentration curl is commonly done seated with the elbow of the arm being trained on the inner thigh on the same side of the body. As the name suggests, the idea is to concentrate the concentric contraction in the biceps brachii and brachialis.

From a seated position, move the feet outside of the shoulders. Hinge from the hips, keeping a flat back and braced abdominals until just above the left elbow is midway on the inside of the left thigh. With a standard or hammer grip, flex at the elbow to bring the weight towards the left shoulder. When maximum elbow flexion is achieved, extend the arm, and lower the weight back to the starting position.

The technique of a 21 can be used for nearly any exercise. It uses shorter ranges of motion to keep the target muscle under tension longer to maximize fatigue and, as a result, ensure muscle growth and strength increases.

For the biceps curl, 21s can be completed with dumbbells, kettlebells, cable, bands, or a barbell.

These are only a few of the possible biceps curl variations! Whether you train in a large gym or are a home gym warrior, these variations can help you switch up your routine and target your upper arms effectively. If you’ve been thinking about getting your personal training certification and diving into the fitness industry, don’t wait any longer! Get started on the ISSA Personal Trainer Certification today!