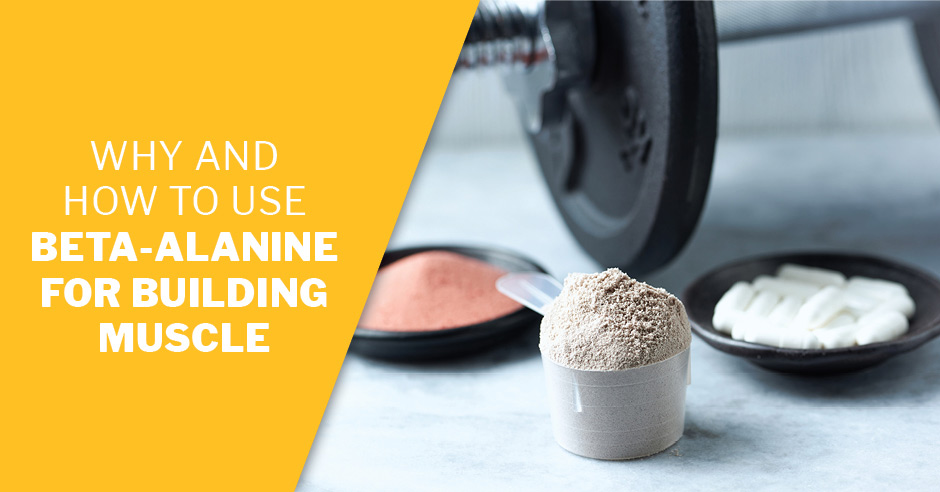 Why and How to Use Beta-Alanine for Building Muscle

If you want to build more muscle mass, supplementation can help. Creatine is one of the best-known muscle building supplements. A branched chain amino acid (BCAA) is another. But what about beta-alanine? What is this supplement and what does it do for muscle gain?

Beta-alanine is a non essential amino acid produced by the body. Though, it is also available in supplement form. One of its main functions is to increase muscle carnosine levels. Carnosine helps buffer the acidity in muscle tissue. This acidity occurs often with high intensity exercise.

When you do a vigorous workout, lactic acid accumulates in the muscle. As lactic acid increases, muscle pH levels decrease. This decrease can reduce your performance. Lactic acid in the muscle can also increase fatigue. (A low pH level contributes to fatigue too.) Carnosine helps counteract both of these effects and beta-alanine boosts carnosine.

Many studies have looked at the effect that beta-alanine has on skeletal muscle. Several have found positive effects related to muscle power and strength.

One example is a 2018 study. This piece of research involved 30 people. Each one engaged in a 5-week strength training program. The intervention group took 6.4 grams of beta-alanine supplementation per day. The control group took a placebo.

Those taking beta-alanine had "significantly greater" improvements in training. These improvements were better than those seen in the control. They had greater maximum power output. Their one-rep max (1RM) was more powerful too. Thus, researchers concluded that they had greater strength gains.

A 2013 study involved 20 males. They each engaged in resistance training three times per week for a total of eight weeks. Some took a supplement that contained three ingredients. One was beta-alanine. The other two were creatine monohydrate and branched chain amino acids. The rest took a placebo and served as the control.

At the end of the eight weeks, the supplementation group had greater strength increases. The bench press exercise was used to learn the effects. Their lean body mass increased more than the placebo group as well.

A different study looked at a combination program. In this case, beta-alanine supplementation was used. But subjects also engaged in high-intensity interval training. After only three weeks, they noticed significant improvements in their VO2. Both utilization and peak levels were better. After three more weeks, there were more changes in their lean body mass. Combining these two methods had helped them better change their body composition.

Other Benefits of Beta-Alanine Beyond Muscle Growth

One review of beta-alanine supplementation indicates that it can also improve athletic performance. This same study reported that it also reduces neuromuscular fatigue. It does this by increasing carnosine levels. This limits the effects of oxidative stress.

Reducing muscle fatigue means that you can work out longer and harder. It sets you up for greater muscle endurance. And it does this even during more intense physical activities. Your exercise capacity increases because your muscles can endure more.

Science continues to show that this amino acid is good for short bouts of exercise. Researchers also wanted to know if it had an impact on muscular endurance. A 2009 study set out to find the answer. Its goal was to determine the effects of beta-alanine on endurance athletes. Those taking the supplement had greater power outputs. They had a stronger sprint to the finish line. Another study found that beta-alanine improves an athlete's 10k running time.

Even more studies have attempted to learn whether beta-alanine assists with muscle recovery. Or if it can help with muscle soreness. One piece of research found positive results. It noted that, after doing judo, athletes taking beta-alanine recovered faster. Yet, many other studies have failed to make a reliable and significant connection.

A review published in the Strength and Conditioning Journal provides many supplementation tips. It reports that most beta-alanine studies involve taking between 1.6 and 6.4 grams daily. Additionally, the typical study consists of supplementing for 28 days. Though, some research shows increased muscle carnosine content after supplementing for 10 weeks.

Based on previous findings, effective supplementation guidelines are recommended. For athletes, this is up to 6.4 grams of beta-alanine per day. Though, it is not recommended that you take this amount at one time. Instead, break it down into four 1.6-gram doses. Allow for at least three hours between each smaller dose.

The reason for this is because taking all 6.4 grams at one time can cause flushing. Flushing is a reaction where the skin feels irritated and prickly. It has a lot of the same characteristics of an allergic reaction and can cause some discomfort. Breaking it into smaller doses and spacing them over time can reduce this type of response. In some cases, it may stop it completely.

The Office of Dietary Supplements (ODS) considers beta-alanine supplementation safe. That is, as long as it doesn't exceed 6.4 grams per day. This agency also reports no safety concerns when you take this supplement for eight weeks or less.

It may be beneficial to combine beta-alanine with other supplements. This can sometimes provide a more pronounced effect. For example, one study found combined it with creatine supplementation. It found that this was more effective than creatine alone. The combination provided greater changes in lean body mass and body fat percentage.

Who Should Not Use Beta-Alanine for Increased Muscle Strength?

Like with any other supplement, beta-alanine isn't for everyone. For example, some people are more sensitive to its effects. This can include tingling in the face, neck, hands, or upper trunk. Some people may also notice that their skin itches after taking this amino acid.

Again, breaking it into smaller doses can help. So too can spacing intake over the course of the entire day. Together, this can help mediate these effects. If the effects become too much, it may be best to avoid supplementation completely.

How to Increase Beta-Alanine Without Supplementation

You can also increase your beta-alanine intake through your diet. This will help increase the carnosine content within your muscles. Animal proteins like meat, fish, and poultry contain small amounts. While it may not supply your entire desired intake, every little bit helps.

Some protein powders also include beta-alanine. This makes it even easier to include this amino acid in your diet. Especially if you already use protein powder as part of your dietary regimen. You can raise your carnosine levels without changing your diet or routine.

Building lean muscle goes beyond supplementation and eating the right foods. It also requires regular resistance training. Earning your Strength and Conditioning Coach certification can help. In this course, you will learn the best exercises for muscle growth and performance. It also explores other supplements designed to improve athletic performance.

ISSA's Strength and Conditioning course bridges the gap between science and application by giving students the "how" of helping athletes achieve any sport-related goal. With this course, not only will you learn the exercise science behind strength and conditioning, but exactly how to create the perfect training program for any athlete. Further, it offers one of the only accredited exams in the strength and conditioning space, making you a hot commodity to any employer.