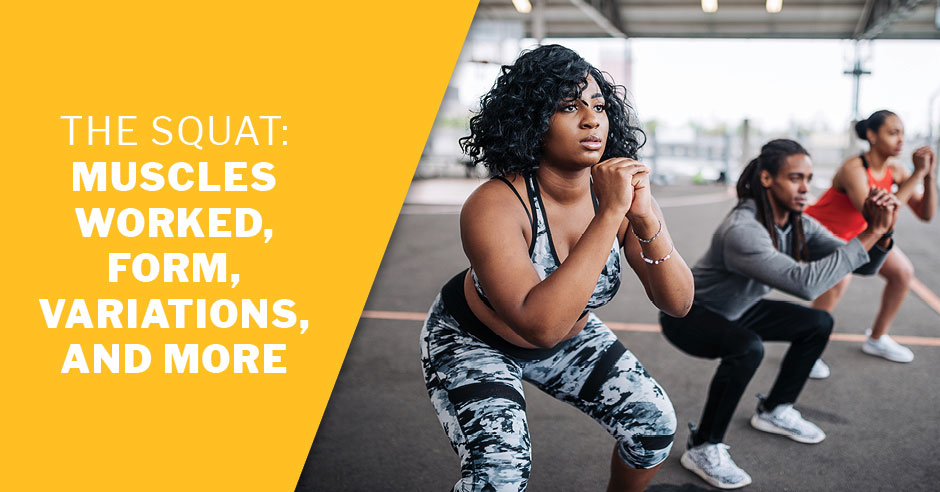 When compared to other strength training exercises, squats aren’t overly complicated. They can also be modified to make them easier or more difficult. This makes squatting a good option for clients of all fitness levels.

Yet, as a trainer, it’s your responsibility to know which clients would benefit most from adding this exercise into their workout. This includes knowing when to suggest the squat as a bodyweight exercise and when to use additional weight. Or when a squat variation might be best.

We’ll go over all of this. But first, let’s start with identifying the muscle groups that are worked when squatting.

What Muscles Do Squats Work?

Squats are a compound exercise. This means that they activate a variety of lower body muscle groups. The groups worked are the glutes, hips, quads, hamstrings, and calves.

During a squat, this muscle group supports hip extension. This makes it easier to stand from a squat position. The glutes also play a role in hip abduction. If you widen your stance—such as in a sumo squat, for instance—the glutes help you do this. The abductors also prevent knee valgus during the squat. This is when the knee caves in.

Point your toes outward slightly, and you will engage the glutes more. This is because the glutes are responsible for external hip rotation. Although, you don’t want to turn the feet out too much. Aim for 30 degrees or less.

Several muscles make up the hip flexors. They include the iliacus, psoas major, and sartorius. The hips help stabilize your pelvis during the squat. They do this by pulling the pelvis forward.

If your hip flexors feel tight when squatting, try adjusting your stance. Widen it or point your feet to the side slightly. You may also have to reposition your trunk. Make sure it sits above your pelvis.

The quadriceps are also known as the thigh muscles. They include the vastus lateralis, vastus medialis, and rectus femoris. (There are also five adductor muscles that make up the inner thigh.)

This muscle group powers the squat motion. You use your quadriceps to straighten your legs into a standing position. The power your quads can supply depends on the type of squat you do. If you do a back squat, you can lift more weight than with a front squat.

The type of squat can also affect how much torque is placed on the knee. A front squat stresses the knee joint more than a back squat.

The three hamstring muscles are the semitendinosus, semimembranosus, and biceps femoris. These muscles are on the back of the thigh.

The main goal of the hamstrings is to stabilize the knee. They contract when your knees bend. They lengthen when you bend at the hips.

The gastrocnemius, soleus, and plantaris are known collectively as the calf muscles. The calves also help with knee stabilization.

You use your calves when pushing from the lowest position. The barbell squat is especially helpful if your goal is to build muscle or strength in the calves.

The calves also stabilize the ankle and foot during the squat exercise. If you have flat feet, ankle mobility may be an issue. This can prevent you from getting into a deep squat. Work to loosen the calf and foot muscles. It may also help to wear shoe orthotics.

It should be noted that you can modify the squat to work the upper body as well. If you want more core strength, do a squat while holding a weight in front of you. If you want to work your core muscles, do single-leg squats.

You can also modify squats to help build your heart muscle. Jump squats are a good example. Include these in your workout plan and it will get your heart rate going. That makes this a good exercise for people who want to burn body fat.

Several factors can impact which muscles a squat works. This is important to know as a personal trainer. If your client wants more strength in their lower body, most any squat will work. But if they want to target specific muscles, manipulating these factors can help.

As you can see, the question of what muscles do squats work is not an easy answer. Yes, they do primarily work the lower body. However, you can change them up to work the entire body.

Benefits of the Squat Exercise

What are some reasons to add squats to a client’s weightlifting workout? One is that they can increase lower body strength. This is helpful for performing everyday movements such as walking, running, or hiking. Strong legs also make it easier to push a mower or pull kids in a sled.

Certain athletes benefit from increased muscle strength in the lower body. This includes those that play soccer or basketball. Track and field runners, gymnasts, and swimmers also benefit from strong legs, glutes, and hips.

Research indicates that “the squat is among the top three prescribed exercises for sports training, rehabilitation and prehabilitation.” When used in sports training, it can improve an athlete’s performance. This includes improving sprint speed and vertical jump height. As a means of rehab or prehab, squats can be used to improve balance or reduce muscle loss in older adults.

The amount of weight used when squatting changes its level of intensity. Using one’s bodyweight makes this exercise less intense than using a barbell, for instance. Using dumbbells or a kettlebell fall in between the two.

The bodyweight version can also be beneficial for clients who want to work out at home or while traveling. Because it requires no equipment, they can do this exercise anywhere. Conversely, they’re more likely to do a barbell squat while in the gym.

Using bands offers another resistance training option suitable for almost any exercise setting. Start with a band that offers lighter weight resistance. Once that weight feels easy, move up to the next resistance band. Or, if using an actual weight, increase that weight by five or ten pounds.

As previously mentioned, proper form is necessary to activate the desired muscles. Using good form can also prevent injuries. What does proper form look like when doing squats?

Have the client stand with their feet shoulder width apart. Their back is straight, shoulder blades back and down, and abs pulled in. When squatting, they should push their hips back and lower their body toward the floor. The goal is to get the thighs parallel to the ground.

If they struggle with form, ask the client to imagine that they’re getting ready to sit on an imaginary chair. This should help them get into the proper position. Once they’ve completed the squat, the exercise concludes by having them stand back up.

One thing to watch for as a trainer is that the client’s knee does not extend beyond their toe. If it does, this can increase the stress on the knee joints.

Another common squat mistake is an excessive forward lean. When doing squats, the upper body should only lean forward slightly. If the client is bending too much at the hips, ask them to keep their torso more upright. This can help protect the back and hips from injury.

The client’s fitness level also impacts how far they can squat. When first starting out, they might find it difficult to get the thighs parallel to the floor. As they become more fit, they will likely find it easier to squat to lower levels. In this way, the squat can be used to measure their progress. 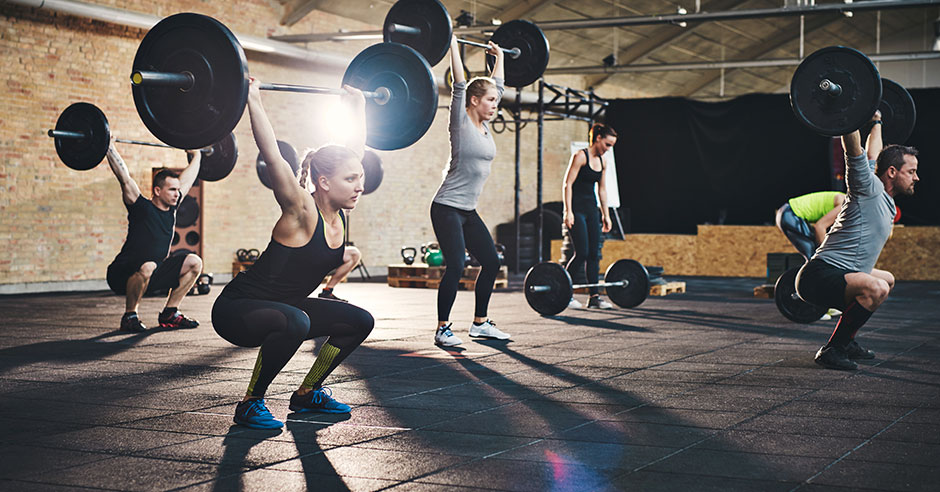 The great thing about squats is the many different variations from which to choose. Some of these variations make the exercise easier while others make it harder. Using different forms of this movement also keeps exercise fun. You don’t get bored doing the same basic squat over and over again.

Here are a few variations to consider when mixing up your client’s lower body routine:

Who Should Not Do Squats

Some clients may want to avoid doing squats. This includes those with knee pain such as patellofemoral syndrome. Talking to their doctor can help determine if squats or a squat variation are safe to perform given their physical condition. Or the doctor may suggest using knee wraps to provide additional support.

If the client experiences knee pain only while doing the squats, an improper form may be to blame. Watch their knees as they lower their body. Look for knees that cave inward (knee valgus) or that bow outward (knee varus). Work with them to keep the knees straight during the entire movement.

Clients with back pain might also want to skip squats and do another lower body exercise instead. This is especially important if they typically use weight while performing the squat.

Earning your certification as a Corrective Exercise Specialist can teach you the skills needed to help clients with movement limitations and pain. This includes learning how to analyze their movement and restore their structural alignment, enabling them to meet their fitness goals in a way that suits them best.

The ISSA's Corrective Exercise Course will help you learn how to identify and correct the most common movement dysfunctions that you are likely to see in a wide range of clients.