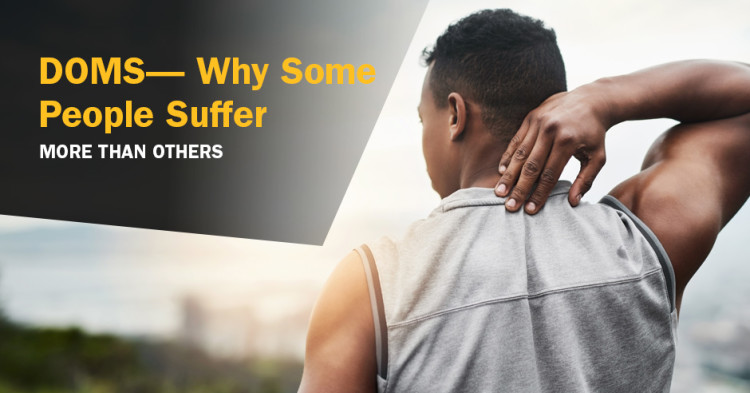 DOMS - Why Some People Suffer More Than Others

DOMS, delayed onset muscle soreness, is a popular fitness topic these days, and the attention focused on it has raised some important questions.

We've all experienced this delayed muscle pain, but some of us seem to get it worse than others. Is it because we're pushing harder with more strenuous exercise? Maybe. But, based on some early research, it seems genes and gender may be the culprits.

First Things First, What is DOMS?

Before we delve into this topic here's a refresher on what DOMS actually is.

DOMS is that pain you sometimes feel a day or two after your workout—in other words, sore muscles. Other DOMS symptoms you might experience include inflammation, muscle stiffness, and decreased muscle strength or muscle function in that area.

Though the exact cause of DOMS hasn't been nailed down yet, researchers have found that it may come from one or more of a few factors:

There is also some research that indicates the DOMS pain you experience is from little tears in the muscle tissue caused by exercise. In other words, it could be actual muscle damage making you feel the pain a few days later.

Learn more: What is delayed onset muscle soreness and how can you avoid it?

So, is it true that some people are more prone to DOMS than others, or are you just imagining it? There do seem to be some differences, based on genetics and gender, not just the level of strenuous exercise.

The Role of Genes in Muscle Soreness

Studies of genetics, muscle stiffness, and muscle soreness after exercise indicate that genes could play an important role in how sore you get, if at all. There are at least two important genes involved:

Each codes for a protein that plays a role in DOMS. 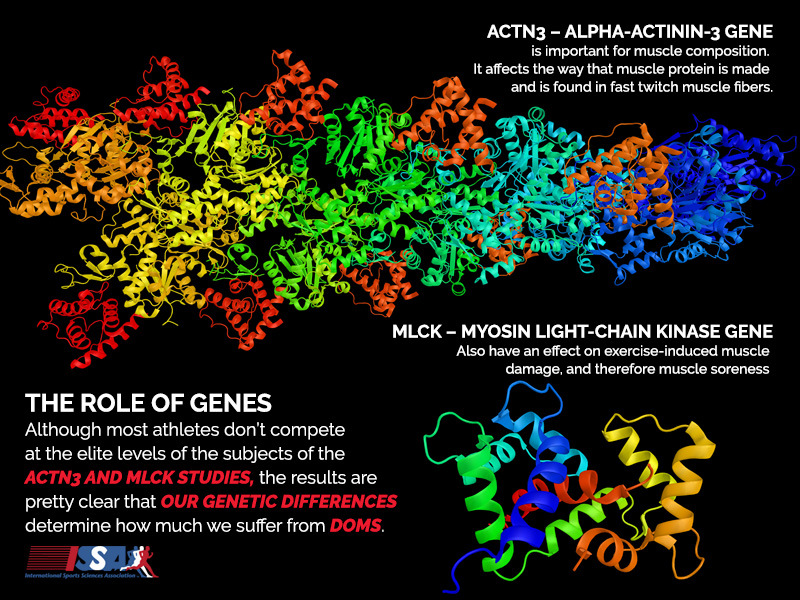 Scientists have discovered that the ACTN3 gene is linked to sports performance.[8] There are three types of ACTN3 genes a human can have: XX, RR, and RX.

People with the XX form of the gene have a deficiency in the ACTN3 protein and instead produce more of the ACTN2 protein. ACTN2 seems to be connected to endurance, while ACTN3 is related to power, speed, and fast twitch muscle fiber.

People that have the RR or XR forms of the gene make more ACTN3 protein and are better at power and speed than endurance.[1]

So, in other words, a deficiency in ACTN3 protein can mean reduced performance in speed and power.[8] Or, it may manifest at being better at endurance, depending on how you look at it. Though they can still be strong and powerful, people with fewer ACTN3 have to push harder to make gains in power and strength.

Ok, but how does this relate to DOMS?

The ACTN3 protein may reduce the muscle damage caused by eccentric muscle contractions. Therefore a deficiency in ACTN3 can mean that the person is prone to more muscle damage and, therefore, experience more resulting soreness.

This all shows that some people can be predisposed to performance abilities, like power and speed over endurance.[8] In the study "ACTN3 Genotype Is Associated with Human Elite Athletic Performance" hardly any of the elite athletes that were genotyped were missing or deficient in the ACTN3 gene coding for this protein.

This strongly indicates that the gene may be beneficial to sprint and power athletes and if you don't have it you may have limitations. They also go on to say "In addition, α-actinin-3 may be evolutionarily optimized for the minimization of damage caused by eccentric muscle contraction." [8]

There is more evidence of the importance of the ACTN3 gene in protecting you from getting sore. A study that compared marathon runners found that people who carried the gene that made them deficient in ACTN3 had more markers for muscle damage after a long distance endurance-type event like a marathon.[5]

Another similar study done by the same researchers showed that a triathlete who was deficient in ACTN3, had more muscle damage (exercise-induced) after competing in a half triathlon.[5]

Takeaway: *The ACTN3 protein may make you a better power and speed athlete, and protect you from muscle damage. If you make less of it because of the genes you have, you may be more prone to DOMS.*

Another gene, called the Myosin Light Chain Kinase gene, may also have an effect on exercise induced muscle damage, and therefore muscle soreness.[5]

Takeaway: *Although most athletes don't compete at the elite levels of the subjects of the ACTN3 and MLCK studies, the results are pretty clear that our genetic differences determine, at least to some extent, how much we suffer from DOMS.* 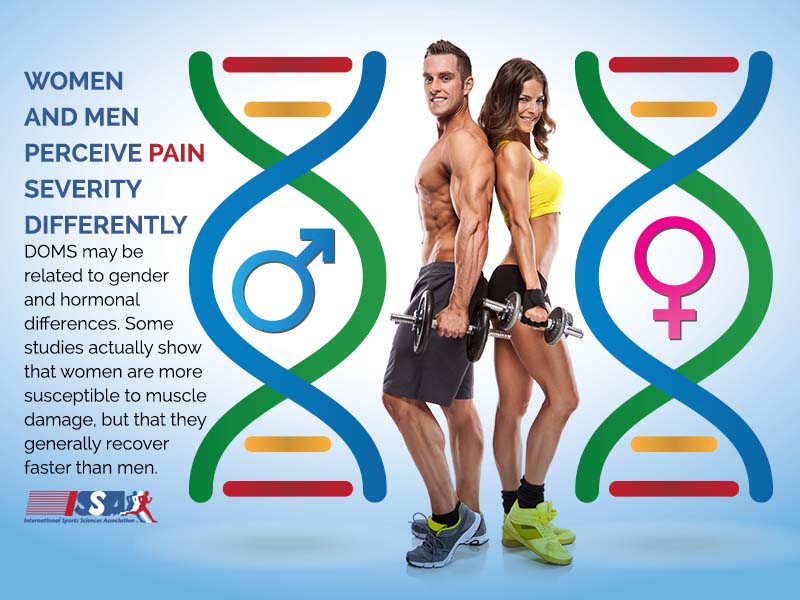 Another interesting result of studies of DOMS is that it may be related to gender and hormonal differences.

The conclusions that can be drawn from this research are mixed, though. Some studies actually show that women are more susceptible to muscle damage, but that they generally recover faster than men.

There are also some discrepancies in recent findings that make it hard to come to a firm conclusion about gender and DOMS. One issue is that most studies demonstrate that women and men perceive pain severity differently.

On the other hand, it also seems that estrogen does have a positive effect on muscle cells, so women may be at a slight advantage when it comes to fending off DOMS.[7]

Some studies have put estrogen to the test to find out if there really is an advantage. One study tested women who were either on birth control or who were not on birth control but did have a regular menstrual cycle.[2]

The women were directed to do bouts of downhill running. Though both groups got DOMs because of the eccentric movement involved, the group that was on birth control had a lower amount of creatine kinase than the women who weren't on birth control.[2]

It may be that the elevated amounts of estrogen due to the birth control protected them from muscle damage.

The study was based on previous study results that show after men complete eccentric exercises there is a peak in their creatine kinase levels. This peak went hand in hand with the muscle soreness they felt after the exercise.

Increased estrogen can mean less creatine kinase, therefore, less muscle soreness or DOMS. In this study, compared to the men, women's creatine kinase activity was brought back to a normal or lower level more quickly after the exercise that caused it to rise.[8]

After downhill running it took men 72 hours to have their levels back to normal, but for women, it only took 24 hours.

Despite your best efforts, you may still experience acute muscle soreness or DOMS. So what can you do to boost muscle recovery and tend to the sore muscle group? Try active recovery techniques such as foal rolling the affected muscle, getting a sports massage, or practicing yoga.

In the future, avoid intense exercise until you have properly ramped up your training to that level of a tough workout. The risk of muscle strain or muscle injury isn't worth going too hard too soon.

Can You Prevent Delayed Muscle Soreness?

The best way to prevent DOMS is to ramp up exercise slowly, pay attention to how your client is feeling, and allow time for muscle recovery.

The Takeaway for Trainers

What can we draw from all of this research into DOMS and our differences? Put simply, all our clients are different and no athletic training package should be one-size-fits-all. Some of our clients are going to get sore sooner and more severely than others.

As trainers, one of the most important things we can do is get to know our clients. Work with them individually to craft the workout plans that will help them achieve their unique fitness and athletic goals, with as little DOMS as possible.

Love fitness but not yet a trainer? Get started with ISSA's Personal Trainer certification course to jumpstart your new career!