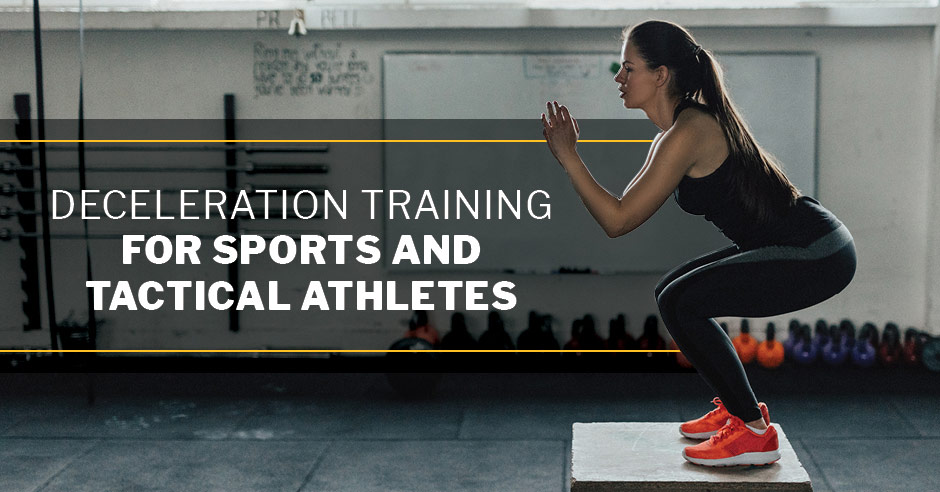 Speed can separate high-level athletes from average athletes. But speed is not the only factor. Sports require more than just running in a straight line. Changing direction at top speed is another critical component. At the same time, they must control the force applied to the body.

Athletic performance relies on reactive strength and power output. But being able to control force production through proper deceleration is just as important. Plyometric training helps athletes develop force. This can be used to improve deceleration capacity also.

As a strength coach, using power training in all muscle action phases creates dynamic balance. Deceleration techniques such as landing mechanics and eccentric strength will help. Let's dig into deceleration training and some exercises that can help your athlete fine-tune their skills.

If we look at vertical jump performance, we see that it depends on an athlete's ability to progress three phases with maximum force. To create force in the lower body the athlete must begin by bending at the knees and hips. This is the eccentric phase.

This is important to know because it shows us deceleration training can be trained through force absorption. This happens throughout the landing after the jump. Exercises like depth drops, or squat jumps help with deceleration technique. This is because you are training the body to absorb large amounts of force.

Exercise can increase an athlete's deceleration ability, which transfers to all movement. This includes speed, agility, and strength.

Coaches are quick to prescribe sprint training to help with deceleration. Accelerating then sprinting then stopping is not the only way to work on deceleration. Instead, you can build a foundation through strength training and plyometric exercises. This will help all athletes, including youth athletes, prevent injury and increase performance.

While speed is necessary for most sports, if that speed doesn't encompass agility and strength for change of direction, it's much less beneficial. Athletes are constantly stopping and going in different directions. This is where injury occurs, especially during the turn of a movement. When the body's ability to control the force is limited, deceleration training is needed.

This plane separates the body into right and left parts. The main muscle actions that occur in this plane are flexion and extension. Dorsiflexion and plantarflexion are included. Exercises like linear broad jumps occur in the sagittal plane.

The landing after the jump is the most optimal point for controlling force eccentrically. A stable landing after an explosive jump helps improve the body's ability to decelerate.

Unlike the sagittal plane, the transverse plane divides the body into top and bottom parts. Rotation, pronation, supination, adduction, and abduction all happen in this plane. Note that adduction and abduction occur when the arm is at a 90-degree abducted position.

These are all effective exercises for getting the body used to moving in different ways.

Many exercises can be modified to be easier or more difficult. Don't be afraid to add weight to exercises using dumbbells, med balls, or barbells. Aim to increase intensity by adjusting motion in an exercise. For example, adjust a depth drop landing to a split squat landing.

One of the most fundamental movements is a squat. Squat jumps turn this exercise into a plyometric exercise. This generates more force and then absorbs it through each landing. Your athlete starts with their feet shoulder-width to hip-width apart. They'll descend into a squat by bending at the hips and knees.

As they quickly descend, they forcefully extend the hips and lower body back up. This allows them to jump off the ground as high as they can. As they land, they absorb the pressure and weight by sticking the landing with two feet. Simultaneously bending at the knees and hips.

Have your athlete start with their rear foot elevated on a bench. Lunge and drop the back knee down towards the ground. Explode back up with force bringing the front leg and foot off the ground.

Finish with a stable landing for eccentric training and deceleration. Though this is different from a sprint where you're running and stopping as fast as possible, it is still training the same muscle action and contraction that will transfer to speed and other sports movements.

Standing on top of a box, allow one foot to hang off in front. Let your body drop off the box quickly catching and landing on both legs. Bend at the knees and hips to absorb the landing. Keep the feet grounded.

Perform the depth drop, then absorb the pressure. Quickly snap the arms down bending at the knees and hips. Concentrically move and explode into a broad jump. Jump as far out in front of you as you can. Be sure to maintain stability and balance throughout the second landing.

Advanced training applies to more than just sports athletes. Learn how to apply specific training programs designed to match the demanding occupations that save lives. As an ISSA Certified Tactical Conditioning Specialist, you'll get clients to achieve the physical, physiological, and aesthetic results seen in tactical athletes training for their job. Tactical athletes need powerful programs—be the trainer who achieves powerful results.

As an ISSA Certified Tactical Conditioning Specialist, you'll get clients to achieve the physical, physiological, and aesthetic results seen in tactical athletes training for their job. Learn how to apply specific training programs designed to match the demanding occupations that save lives. Tactical athletes need powerful programs - be the trainer who achieves powerful results.