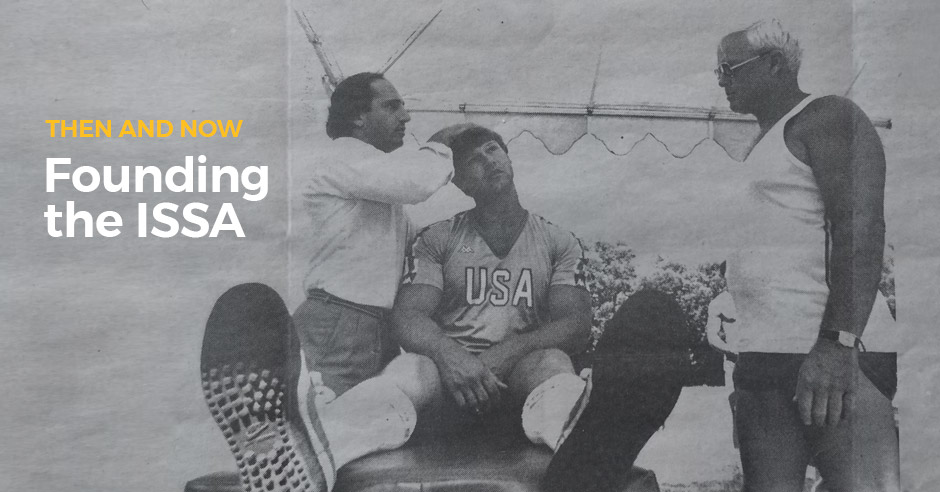 From the 1984 Olympics to the Founding of the ISSA

Back in 1988, the International Sports Sciences Association was the first organization to educate and certify personal trainers. What few people know is the motivation behind the development of this institution and the vision of its founders.

Understanding the history of certified fitness trainers sheds an interesting light on who we are, what we stand for, and why we motivate, inspire and teach others. The story of the ISSA and certification for trainers starts with an extraordinary moment in Olympic history.

The 1984 Summer Olympics: A Unique Moment in Sports History

The 1984 Summer Olympics was a pivotal game for the United States. After the U.S. had boycotted the 1980 summer games held Moscow, the Olympic Games in Los Angeles were in turn, boycotted by the Soviet Union and other Soviet bloc countries.

That last bit may not seem too important, but it was. The chiropractor for the USA Track and Field team in 1984 was our very own Dr. Sal Arria, the president and co-founder of the ISSA. The events leading up to the day he walked into the Olympic Stadium, and those that follow, clearly show his mission and a vision that would eventually become the International Sports Sciences Association (ISSA).

The Early Years of Chiropractic Medicine

Recently, I had the pleasure of personally interviewing Dr. Arria about his decades-long career in sports medicine, training and rehabbing high-level athletes and treating nearly 20,000 patients. During that interview, it was very clear that his mission has always been the same: to improve both performance and the quality of life, with all the tools he had available to him, one athlete or one patient at a time.

The court eventually ruled in Wilk's favor, and the AMA revised their ethics statement allowing medical doctors to ""be free to choose whom to serve, with whom to associate, and the environment in which to provide medical services."

Despite continued tremendous resistance from the medical community during this time, athletes from many countries, sought chiropractic care to improve their performance and functionally relieve them from their musculoskeletal conditions, without the use of drugs or surgery.

Going to the Olympics

Between 1980 and 1985, Dr. Arria worked with USA Track and Field Elite athletes including the incredible Jane Frederick, world champion in the pentathlon, heptathlon, and 100 meter hurdles, Bob Roggy, an American record holder in javelin, Dave Laut, a four-time U.S. champion and 1984 Olympic bronze medal holder in the shot put to name a few.

At the 1983 East Germany/U.S. track meet in Los Angeles, chiropractors were banned from treating athletes, but because of the strong demand from the athletes themselves, Dr. Arria threw his portable chiropractic table over the fence and unofficially treated many athletes from both the East German and American teams under the bleachers!

In 1983, a few months before the World Track and Field Championships in Finland, the top two Finnish javelin throwers, Tina Lillak and Arto Harkonen, traveled to Santa Barbara to train and be treated by Dr. Arria for a month for conditions that had taken them out of the competition. Tina Lillak went on to break the world record at the 1983 World Championships, and Arto Harkonen ended up winning the gold medal at the 1984 Olympics.

At the USA Track and Field coaches association meeting before the 1984 Summer Olympic Games, the athletes in attendance requested that a chiropractor be part of their sports medicine team. The coaches agreed and shortly after that, Dr. Arria got a phone call requesting his participation. He received a letter with his credentials and instructions to report to the medical tent at the UC Santa Barbara Olympic training camp.

At the Olympic training camp, there was a continuous line of athletes, all seeking his help. And they weren't just coming for adjustments, but also for advice on sprains, strains, stretching, training, and peaking for competition.

At that time, Dr. Arria had the largest sports medicine clinic between Los Angeles and San Francisco but what was unique was the glass-walled gym in the center of his clinic for all patients to see what was in store for them.

The gym was placed in the center because he felt it was where the most important part of treatment took place. According to Dr. Arria, after a diagnosis, surgery, chiropractic adjustments, physical therapy, and rehab, helping athletes (and patients) return stronger, more agile, faster and healthier than before their injury or condition, was the only goal.

Surgery, chiropractic care and physical medicine can only do so much. Once injuries heal, specific strength training and conditioning is how athletes return to an even higher performance level they had before their injuries.

"When it was time for athletes to return to the field, if we hadn't made them stronger, more flexible, faster, and more conditioned than they were before they got injured, we would be doing them an injustice." -Sal Arria

Founding the ISSA: A Vision of Fitness for All

Since Dr. Arria also treated "regular" patients as well as athletes, they too received the same comprehensive level of care as elite and Olympic athletes. As you can imagine, patients always loved seeing these incredible athletes in his clinic and admired watching them train in the gym, so they quickly realized that to be a patient of Dr. Arria, they too had to participate in their health care and follow the same complete approach to getting well.

And that's how it all began....because he saw that his approach to health care (in lieu of sick care) was so successful, Dr. Arria had a vision to create a grassroots movement that would provide the general public around the world, with an army of educated and trained individuals who could motivate, inspire and educate them to live stronger, healthier lives through weight training, cardiovascular conditioning, flexibility, sensible nutrition and a positive, active lifestyle.

To accomplish this monumental goal, he knew that like any other allied health profession, creating an educational program was his priority, so he called a good friend, a world champion athlete and world-renowned sports scientist, Dr. Fred Hatfield, aka Dr. Squat. Dr. Hatfield had written over 20 textbooks in the field of exercise science and training and was the perfect expert to help him create the curriculum to educate this army.

While at first, "big guys with big arms" who worked in gyms embraced their vision, today, over 200,000 men and women, young and old, have joined the team and are changing lives in the trenches of communities in 92 countries around the world....they are ISSA certified fitness trainers.

And while individual trainers can be traced back to the days of the gladiators, the actual profession of personal fitness trainers was born under the leadership of Dr. Arria, Dr. Hatfield, and the ISSA.

It was evident in our conversation that Dr. Arria's only goal and sole passion is to see us, as fitness trainers, use our unique skills in our communities to change lives through what he calls, the 5 most important key elements of true health care...weight training, cardiovascular conditioning, flexibility, sensible nutrition and an active, positive lifestyle.

These five elements comprise a domain of knowledge and skills that to this day, no other profession or branch of medicine or allied health care addresses, yet countless medical and scientific studies have proven that they are the keys to preventing or reversing most all preventable diseases.

Just like Dr. Arria's sports medicine clinic gym, we as certified fitness trainers are the bridge between medical and allied health professionals who repair and rehab injuries, and the individual's ability to return stronger and more conditioned than before their injury or illness.

We are also the profession who can motivate, educate, and inspire individuals to understand the importance of preventing injuries and disease by change how they take care of themselves and ultimately, take control of their health.

It's exciting because we are not only the trainers but the teachers who can help so many people realize that there is a quality of life and a level of performance beyond their current expectations.

In Dr. Arria's mind, there is no difference between the athletes in the Olympic Stadium, the children on the playground, and your neighbor down the street. They all deserve access to a healthier, more functional, and more productive life, and that is the foundational philosophy of the ISSA.

Are you ready to change lives? Explore ISSA's online course in personal training and get started today!