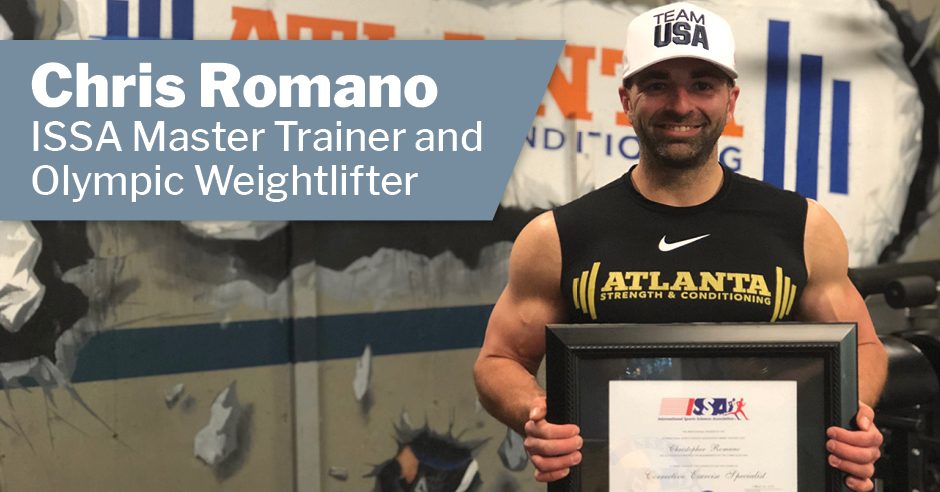 The fact that the word "master" has been tied to Chris Romano's name for most of his adult life says a lot about the level of success he has reached in the world of athletics and fitness.

As the owner and operator of Atlanta Strength and Conditioning, the 38-year-old ISSA master trainer is recognized as one of the top personal trainers in Georgia. When he's not training others, he's in the gym building strength and improving technique as he competes in the Olympic weightlifting masters division (35 years old and older).

And he's not far removed from being a member of the U.S. Ski Team, where he competed on the U.S. Alpine masters circuit (30 and older).

In every instance, Romano has achieved elite status by putting in the work and calling on his competitive spirit to challenge himself and others to strive for excellence.

Owning a gym had long been a goal for the Atlanta native once he took to weightlifting in high school. He became a source of information for family and friends looking to improve their fitness. Becoming a competitive weightlifter was part of a natural progression as well.

Romano's father was a collegiate soccer coach, so Romano grew up on and around the soccer field. Both his parents were recreational skiers, and Romano took to that sport as well. After graduating from Clemson and entering the workforce he continued to ski whenever he could. When he learned of the masters circuit he decided to try out, and he soon discovered that his skill level would allow him to compete on an international level.

"When I retired from skiing, I needed something competitive to do," Romano said. "I tried curling first, but...I realized it wasn't the sport for me. I had always lifted weights, so I decided to compete in CrossFit. From there I moved on to competitive weightlifting."

Romano competes internationally under the umbrella of USA Masters Weightlifting, which is for athletes 35 years old and older. He has been lifting competitively for the past four years, and competed at the Arnold Sports Festival in Columbus, Ohio, last year. Among his accomplishments is a silver medal at this year's Pan Am Weightlifting Championships in the 85 kg (187 lbs.) weight class.

Weightlifting as a Way of Life

Romano is a married father of two boys, and his 5-year-old already is a competitive weightlifter. He took to the sport by being around his dad in the gym, and Romano took it upon himself to teach his young son the proper movements.

The older boy also participates in soccer and baseball, and Romano said he has monitored his son's performance and found that he performs better in both sports when he has been lifting weights.

"He was the only one consistently hitting the ball out of the infield in baseball," Romano said, "and his soccer shots were constantly harder. He was kicking the ball over the other kids' heads and dribbling around them. He was moving with purpose as opposed to just running around with the ball.''

Romano is aware that there are those who have voiced concerns about allowing young kids to lift weights, and he has taken it upon himself to try to quiet those concerns. He points out that ISSA's guidelines relating to youth weight training state that it is safe for a 5-year-old to take part in resistance training as long as he or she is not lifting heavy weights. Young children benefit from resistance training by improving speed, agility, strength, endurance, reaction time, and coordination.

The lifting should always be done in a safe and controlled environment and with proper supervision.

"I've never had him max out or anything like that," Romano said of his son's weightlifting. "I watch how the bar moves. If he's doing well and having fun, I put more weight on it."

Romano believes the early introduction to weightlifting will benefit his son even if he doesn't continue to pursue the sport competitively. Weightlifting increases bone density, and by improving balance and coordination it decreases the potential for injury.

"He's going to be a better athlete because he started doing weights at a young age," Romano said.

Meanwhile, Romano's 2-year-old son is already "throwing the weights around" thanks to Dad, who bought him a plastic weight set. Romano gets a kick of out watching his little one pick up the weights and work on his snatch technique.

Similarly, he gets a lot of satisfaction out of serving as the weightlifting coach at the same high school he attended. It makes for a busy lifestyle, but Romano has found a way to make it all work.

One could say that he has mastered the process.

If you'd like to know more about working with kids in fitness, like Romano with his sons, check out the ISSA's Youth Fitness Certification.