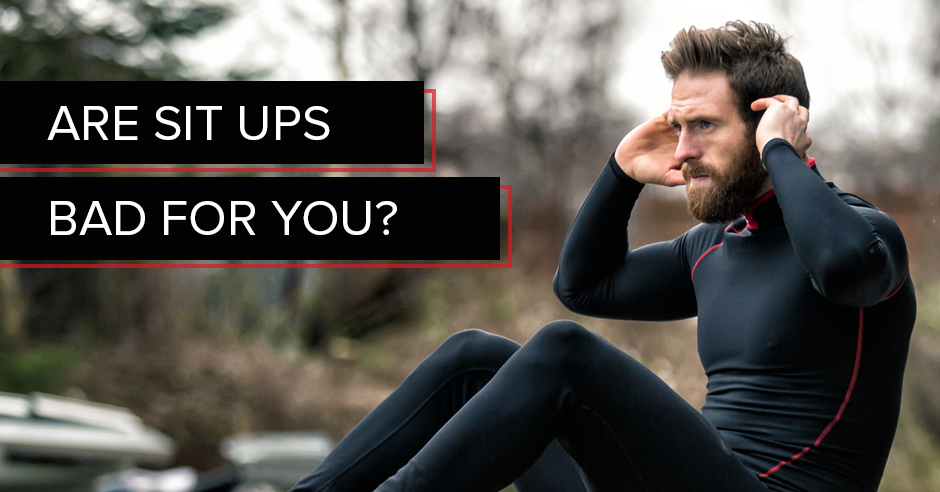 Are Sit Ups Bad for You? The U.S. Military Seems to Think So…

I read an article in the Daily Mail about how the U.S. Army is phasing out sit-ups from the Army Physical Fitness Test as well as in their regular training programs. The Marines and Navy may soon be following suit.

So that got me wondering, what’s the deal? Why are these military institutions giving up on one of the long time staples of their physical fitness routines?

The Army is changing its fitness guidelines because it believes sit-ups can be harmful and that there are better ways to condition and strengthen the core.

The Sit-Up vs. The Crunch

The sit-up has had a long reign as the gold standard in assessing and improving abdominal strength, not to mention in achieving a slimmer waistline and the elusive “six pack.”

Then, we had the crunch, which began to unseat the sit-up as the best abdominal move. We trainers learned that the crunch gives more focused contraction potential to the rectus abdominis muscles, while the sit-up puts too much emphasis on the hip flexor muscles.

The transition from sit-up to crunch was positive, but was it enough? Why move at all when working out the core? Next came the static plank.

The plank is the latest in improving not just abdominal, but total core strength. A plank is what we call an isometric exercise which means the muscle contracts without any actual movement of the body or lengthening of the muscle.

An isometric plank is used to strengthen and improve endurance and stability in the abdominal muscles, while also including the obliques, gluteus muscles, and the hamstrings. To some extent you even work the shoulders and arms.

There are some variations on the plank, but the most basic form is in a prone position with hands, forearms, and elbows on the floor, toes on the floor, and hips up and in a neutral position with the rest of the upper body. In other words, your body is straight like a plank.

Planks are typically held for a designated time period, such as 30 or 60 seconds at a time, or in shorter time periods with only a few seconds of rest in between, such as 20 second holds with 5 second rest periods.

Why Are Planks So Great?

The U.S. military is making a switch to planks because they have discovered what a lot of us trainers already knew:

Planks beat sit-ups every time, in every way.

Planks have been proven both in the gym as well as in the research laboratory to be the most effective way to:

According to Dr. Glenn Wright, associate professor of exercise science at the University of Wisconsin La Crosse, planks target the abdominals in the manner in which they are intended to function…isometrically.

He also states that:

“A lot of strength trainers realized that the main function of the abs is to stop, not start motion, and the plank came out of what the abs are asked to do, which is resist the spine from moving, such as when fighting off an opponent, and strengthening the lower back.”

I know what you’re thinking: Planks are SO boring and if you’ve never actually tried them, they might just look too easy to possibly be beneficial. But this exercise only looks deceptively simple.

It may seem counterintuitive to switch from active movement of a muscle group to not moving at all, but planks work and if you try them you will feel it.

Staying still and as stiff as a board while on your elbows and toes is a lot more difficult than it looks.

What about Using Sit-Ups and Planks?

Why can’t you include sit-ups and crunches along with planks for a complete workout?

The truth is that research is starting to show us that sit-ups are not only less beneficial than the isometric plank; sit-ups can actually be dangerous.

According to Harvard Health Publications, sit-ups can be very hard on the spine and potentially damaging. If you have ever felt lower back pain and strain during a sit-up, you know this already.

A sit-up pushes the curved spine against the floor, and as mentioned earlier, employs the hip flexor muscles. (These are the muscles that run from the thighs to the lumbar spine in the lower back.)

When the hip flexor muscles are too strong or too tight, they can ‘tug’ on the lower spine, which can create low back discomfort.

With a sit-up, and to lesser extent crunches, the position and movement of the body works against the natural curvature of the spine, and therefore can lead to low back discomfort, pain, and even injury.

One study actually found that 56 percent of all soldiers’ injuries relating to the “old fitness test” administered by the Army, were directly due to sit-ups.

So what is the takeaway message for you as a trainer? What exercises should you be doing for your core and recommending to your clients? Is the answer as straightforward as totally eliminating sit-ups and crunches in favor of planks? Are sit-ups always bad?

With All the Information Presented to You, What Is the Final Answer?

In my opinion, there is still a place in the world of health, fitness, and wellness for the crunch. I think that there are enough benefits to the movement if done properly to justify it still being included as part of a comprehensive training program.

With all the evidence from research, I also give the plank a big gold star for being the most effective, most efficient, and most importantly, the safest core strengthening and stabilizing exercise in the industry today.

So if you haven’t done so already, it’s time to ditch the sit-up. Stick with planks and crunches for the best all-around core fitness and strength.

Passionate about health and fitness? Want to be the best of the best? Check out the ISSA's Master Trainer Certification course! Help more people. Make more money. Be the go-to expert. Get started today!